Project Wideawake #001: Queen’s “We Will Rock You”

Welcome to my first music podcast.

Yes, this is pretty rough. I was seriously tempted to redo the entire thing, but then I decided to leave it pretty much as is, because it would serve as a benchmark for me later as to how much I had improved, assuming, of course, that I improve at all.

Update as of 2014.01.30: I took down the podcast because it contained non-podsafe material. Also, this podcast really sucked.

In the second X-Men movie, there’s a scene where Mystique, disguised as Yuriko Oyama, breaks into Stryker’s computer. If you look closely at the monitor, you can see a folder labeled “Project Wideawake.” For some reason, that caught my attention, and I backed up, paused the dvd, and zoomed in on it. I knew I would have a use for it later.

Then, when I realized that I would be doing a music blog, it didn’t take me too long to realize this would be the perfect title, because good music can keep me wide awake for a long time.

I did try just coming up with some names on my own, and then I googled “cool name generator” and found the Online Name Generator, which gave me a ton of names. I especially liked:

Seriously, small lucky waffle? How awesome is that? I very nearly used that one, but decided against it when I remembered Project Wideawake. But now I’m thinking that I’ve got to come up with some new project just so I can use the name.

Ninth temple? That sounds like something out of Avatar—the cool airbending one, not that postcolonial going-native epic piece of crap that James Cameron came up with. 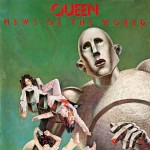 Even if you’re not familiar with the News of the World album, its cover is so iconic that you probably recognize it: 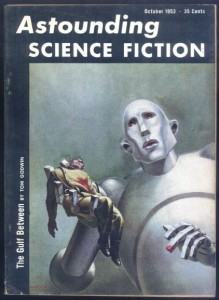 What you may not know is that it was based on a cover for a 1953 issue of Astounding Science Fiction. The band actually went back to the original artist, Frank Kelly Freas, and asked him to redo it using members of the band (in this case, Brian May and John Deacon), which he was happy to do. (Click on either picture to see it full size.)

You are welcome to comment, but be nice. That guy in Poland is listening and we don’t want him to learn any bad words.

This work is licensed under a Creative Commons Attribution-NonCommercial-ShareAlike 4.0 International License.Permalink for this article:
https://iswpw.net/2011/06/11/project-wideawake-queens-we-will-rock-you/
Published on: 11 June 2011 by Ken
Categorized under: Podcasts, Project Wideawake
Tagged with: covers, Frank Kelly Freas, getting older, look closely at the monitor, Paul Rodgers, Queen, Shane Koehler, staying up past my bedtime, that guy in Poland, Warrant, We Will Rock You