For some reason, I had bookmarked this page on John Scalzi’s blog, and had completely forgotten about it until the other day, when I reread it and decided to add “outrage monkey” to my glossary page.

I have to admit, I completely forgot what he was writing about, until I got to the end where he included a few links. But even without that context, what he says it still makes sense, because we live in a democracy where we all have a voice, and if you are in favor of something, or opposed to something, then you should speak up and make your voice heard.

One would think that social media would make this easier, and in some ways it does. Just take the recent example of Ahmed Mohammed, where overwhelming support was shown by the use of the #IStandWithAhmed hashtag, and by retweeting President Obama’s tweet inviting him to bring his clock to the White House: 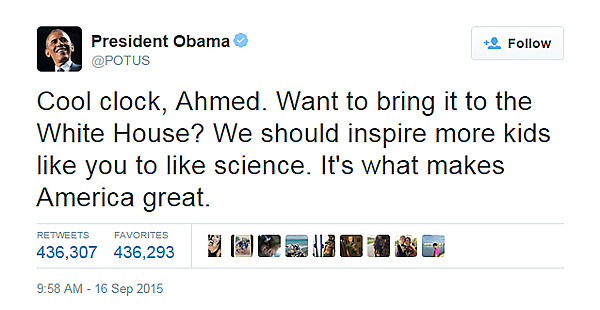 That from-the-bottom effort rather defines for me what democracy can be in this digital age. I didn’t get upset that my favorite famous people didn’t jump on the bandwagon on this one, because I wasn’t expecting them to. I live in a democracy, and when a situation arises that I feel the need to address, I will use my own small voice to address it. My voice alone may not mean much, but my voice added to others does.

Unfortunately, such an attitude runs counter to a lot of people’s perceptions of how social media should (and therefore does) work. In an age where a Kardashian is paid thousands of dollars to tweet about getting a pedicure at a given salon (whether she was actually there or not) and since the Kardashians never get upset about anything (there’s not much money in that), they are never an outrage monkey. Instead they are an approval monkey with all too many people waiting to see what they do next before making a decision of their own.

Don’t get me wrong…I think it’s great when a celebrity supports the same causes that I do. Their voice can add a lot of weight to the momentum of a cause. But I’m not going to wait for that voice. I’m not entitled to it.

That’s right. I’m not entitled to it. Neither are you. Celebrities are people, too (even if I don’t like them), and they have a right to their own lives, just like I do. I have a middlin’ amount of followers on Twitter; the more time I spend there the more followers I get. But there are entire days that go by when I’m not on Twitter at all. I’m busy writing, or taking photographs, making art of some kind, or even better, I’m spending time with friends and family. That’s my right. Famous people have the same right.

And that’s it, really. Democracy only works when we all use our voices. Waiting for, or expecting, a celebrity to chime in before we act isn’t a democracy. Waiting for celebrity to tell you how to think or feel about a thing isn’t democracy either…it’s a mental weakness. When we get to the truth, after all, by challenging each other’s assumptions.

Democracy is a DIY experience. It doesn’t work when we expect someone else to do all the heavy lifting. Upset about something? Be your own outrage monkey. Like something? Be your own approval monkey. You’ve got a brain, so use it to figure out what you like or don’t like, what to be upset about or approve of. You got a spine, so stand up with those things you support and stand up against those things you oppose. And you have a voice, so use it. Don’t wait for the bandwagon. Be a bandwagon of one if need be. It can be messy, and it can be lonely, but that’s how democracy works.

This work is licensed under a Creative Commons Attribution-NonCommercial-ShareAlike 4.0 International License.Permalink for this article:
https://iswpw.net/2015/09/22/outrage-monkeys/
Published on: 22 September 2015 by Ken
Categorized under: Culture, Politics and Economics
Tagged with: social media, Twitter

« How to solve problems