In the days after the election, I had many white friends who reacted to my dismay and outrage by saying that we would just have to “wait and see” what Trump would do. They reminded me that a lot of things get said in the heat of an election, which is true—President Obama and Secretary Clinton certainly went after each other during the 2008 election, and yet she served as his secretary of state during his first term, and he actively campaigned for her during the 2016 election. Hence their advice to wait and see.

I heard that phrase a lot between the election and the inauguration. And always, it was from someone who didn’t have much or any skin in the game.

I had to wait and see just like everybody else, but the campaign of 2016 is an outlier, an anomaly. Let us not forget that Trump begain his campaign by attacking my people: 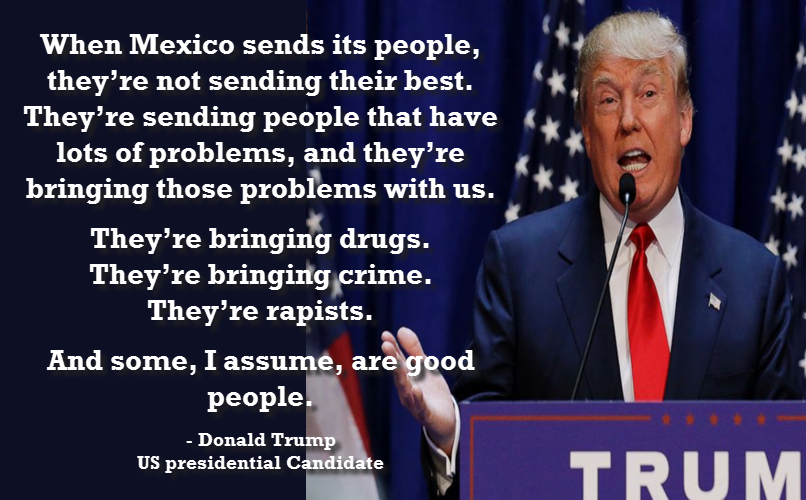 Note his language: “some, I assume, are good people.” That “I assume” is problematic. He’s basically saying that he has no evidence that any Mexicans are good people, but that he is willing to give them—some of them, that is—the benefit of the doubt. How magnanimous.

This was not simply the opening salvo in a clumsy presidential campaign. In the years leading up to this speech, Trump had openly question President Obama’s citizenship. That President Obama was also our first president of African descent is no accident. Certain elements of the United States population have always blamed African-Americans and Mexican-Americans and other racial minorities for the woes of the nation. By first questioning the citizenship of President Obama and then disparaging Mexicans, he was playing right into the hands of the racists, the white supremacists, and the fearful white underclass in the United States.

I did not then need to “wait and see.” I had been seeing—for a long time—what Trump and his team believed and what they intended to do. I did not need to wait and see because I have seen these patterns in history before.

It’s not difficult ot compare the Trump regime to Germany in the 1930s—the parallels are certain there. In fact, Naomi Wolf wrote The End of America, showing that the current Republican administration is already taking the early steps (she identifies ten) toward totalitarianism, toward closing down the free and open society that is the United States.

The problem is that Wolf’s book was published in 2007. The Republican administration she was worried about was the second Bush administration.

Based on what we’ve seen so far, the Trump regime makes the second Bush administration look like a bunch of basically decent but rowdy high school kids out on a weekend bender.

I think most of my friends who gave the “wait and see” line didn’t realize that I was reacting to Trump’s remark on a deep personal level.

It is all too easy to justify his statements by claiming that he was speaking only of criminals or illegal immigrants, but he was not. If he were, he would have chosen his words more carefully. His statements were not aimed at Mexicans, or Mexican-Americans, or Latinos in general, or even the mainstream Republican voter. His statements were directed toward his base—that portion of the population who believes that if you lost your high-paying, low-skills job, it’s because a brown person somewhere stole it from you, who believes that the United States would be a better place if only something could be done about the colored problem, when all those jobs would come sweeping back. (Never mind that the truth is that those jobs were not taken by brown people, but by robots, who never come in late, never take a day off, never complain about working conditions, never ask for a raise, can work 24 hours a day seven days a week, and who can do the job far more accurately and precisely than even the best-trained human.)

His remarks were aimed squarely at those voters who believe in the myth of a golden age in American, when the only faces on television and in the movies and in magazines and newspapers were white faces, when a high school education guaranteed them high-paying jobs, who were able to benefit silently and largely ignorantly from the hard work of brown people, who did not need to worry about inequality becase the economic and social structures their forebears had put in place hid those inequalities so well from them, and who thought of diversity as two kinds of potato salad at the company picnic.

So I didn’t need to “wait and see” what would happen under the Trump regime. He has surrounded himself with people who espouse racist and mysogynistic ideologies, who, in their eternal quest for money and power, will undo decades of social progress and will condemn not just African-Americans and Latinos and Muslims to the garbage dumps of society, but poor whites, as well. Their struggle is not a religious struggle or a racial struggle, but a class struggle. They believe in a zero-sum philosophy in which the only way for them to have more is for a lot of other people to have a hell of a lot less. Of course, they are not above using racial or religious devision to achieve their ends. “Divide and conquer” was an old strategy by the time the Romans were using it, and the “enemy within” model of propaganda was not unique to the Nazi regime. Trump has surrounded himself with people who espouse both of these philosophies.

Because we are at this point in history again—where fear and hatred stand to remake the world—I fear that the answer is a firm and resounding “no.”

I hope that I am wrong.

This work is licensed under a Creative Commons Attribution-NonCommercial-ShareAlike 4.0 International License.Permalink for this article:
https://iswpw.net/2017/02/12/wait-and-see/
Published on: 12 February 2017 by Ken
Categorized under: Modern Life, Politics and Economics
Tagged with: election2016