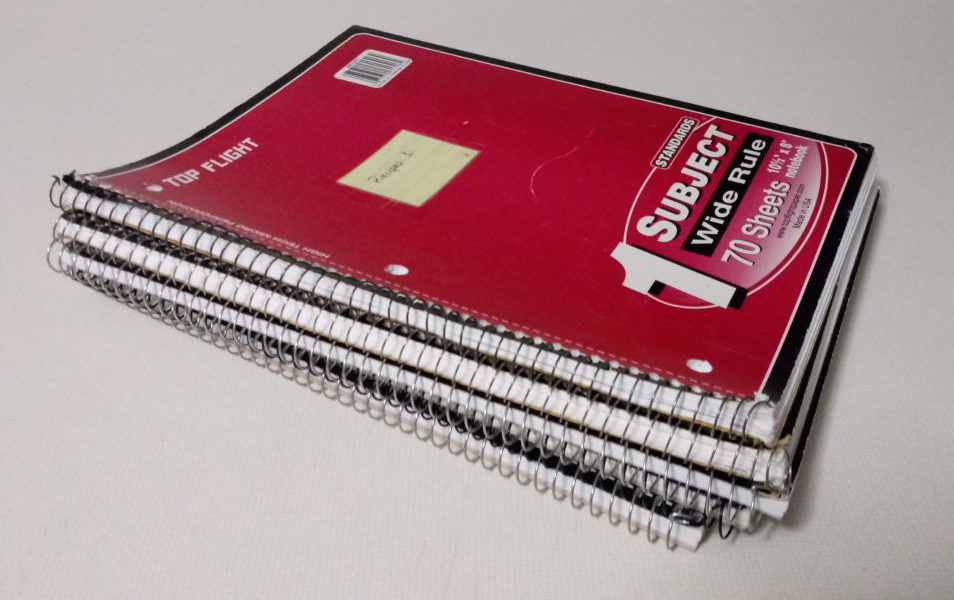 I’m not quite sure how to describe this…

A while back, I used to spend a lot of time visiting my parents on the weekends. My mother mostly spent the weekend either gardening or watching television, depending on the weather. I love working in a garden, but television bores me. So on rainy weekends, I amused myself my copying down recipes she had lying about. (She subscribes to a lot of magazines, and even more back then, so there was no dearth of material.) I like cooking, and I like trying new recipes, so I viewed this as a valuable way to spend my time while she channel surfed. Plus, I’m a scribbler by nature, and if I have to sit, this gave me something to do with my hands.

I managed to fill exactly five of those notebooks with recipes from her cookbooks, her notes, and various magazines and television shows. And then I stopped. I have no idea why. This was about twelve years ago, so perhaps I stopped visiting so much, or I grew bored with it, or she quit watching so much television when I was over. I really don’t know.

Anyway, lately I’ve been purging my house of everything I can get rid of, especially paper, which I can now just scan. Server space is cheap, physical space is expensive; it just makes sense. (Plus, I’ve just thrown away a lot of stuff I once viewed as valuable but turned out not to be, or that turned out to be ubiquitous on the internet—D&D character alignments, I’m talking about you—or that I don’t need/want/value because my life has gone in a different direction.)

Someday, I’ll look through them and start trying out some of those recipes. But not today.

This work is licensed under a Creative Commons Attribution-NonCommercial-ShareAlike 4.0 International License.Permalink for this article:
https://iswpw.net/2019/07/06/recipe-journals/
Published on: 6 July 2019 by Ken
Categorized under: Modern Life
Tagged with: cooking, recipes, the Great Purge