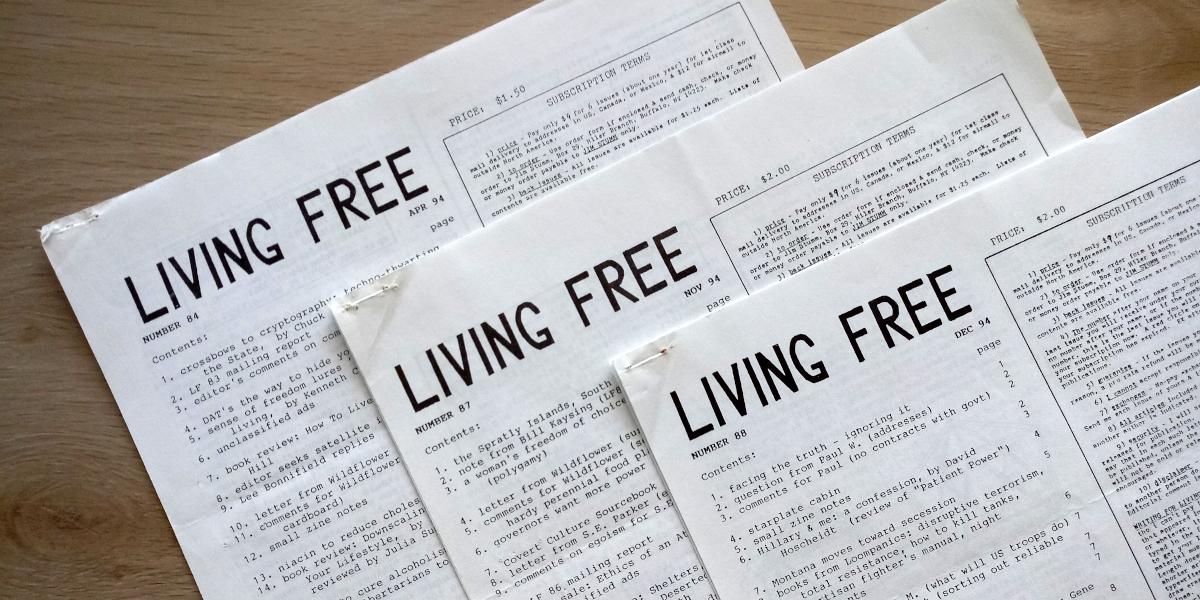 A long time ago, when I was quite young and didn’t know any better (I had an optimistic feeling about other people; experience has shown me that’s probably not a good idea) I was a libertarian.

I admit that the idea of limited government, or even no government, appealed to the very idealistic version of myself that walked the earth in those days. It sounded like paradise, with everybody free to do whatever they like, without any government telling them what to do, and operating under the maxim “my rights end where yours begin.”

Alas, the seven deadly sins are alive and well. People are less than perfect, and need something external to themselves to keep their greed, gluttony, and lust in check, because too many of them suck at doing it themselves. If you want a real-time example of limited government in action (or maybe that’s inaction), look no further than Somalia, which hasn’t had a functioning government in years, and where the seven deadly sins run amock.

Anyway, I did briefly subscribe to a zine called “Living Free,” which was edited and published by a man named Jim Stumm. (As far as I know, he is still alive, retired, and no longer publishing his zine.) Money was always tight in those days (not much changed there), so I was not able to subscribe for very long. I managed to obtain five issues from the early 1990s, plus a handful of other one-off publications he put out.

For almost thirty years, these issues have accompanied me on every move I’ve made.

I have been trying to downsize as much as possible, so it’s finally time to get rid of them. Anyway, I don’t subscribe to libertarian principles any more, especially now that so many of them have been corrupted by the right wing nut jobs that are running rampant in this country.

But I didn’t want to throw them out. As artifacts, they are beautiful objects. (And as I get older, I’ve been thinking a log more about the cultural artifacts we’re leaving behind, especially digitally.) Jim Stumm typed all of these by hand on an electric typewriter, reduced them on a copy machine, laid out the pages on a homemade light table and then photocopied them. These days, the same thing could be accomplished digitally, but at a considerable investment in equipment, although the cost of that equipment has come down as computers and related equipment has come down in price. (I know, because I make my zine this way.) He was doing all of this with a typewriter and some rubber cement and a local copy shop.

For those who are too young to remember them, a copy shop is/was a place where you went to make paper copies of things. In the age before the internet, email, social media, and texting, if you wanted people to know a thing, you either had to call them on the phone, or put it down on paper. I don’t exactly miss those days, but in some small way, I do.

He actually described his method in a rather long (14 pages) publication called “Publish Your Newsletter.” He apparently wrote it in response to individuals who had written to him, because he addressed them by name. From just the first page, he addresses a paragraph about the post office to Mike, half a page about layout to Dianne, and a rather longish section that goes on to page 3 about bookkeeping to Joe. He goes on to talk about advertising, renewals, organization, depreciation and taxes, using a lowercase “i”, purchase orders, writing, paste up (several times, in fact), and his discovery that the cheap black ink that most print shops used at the time gradually fades‒something I learned when I was working in a print shop during this time period. It takes a few years, but it does happen, whether you keep the printed copies out of sunlight or not.

But I don’t want to hang on to these things, either. Even thought they are beautiful artifacts, I no longer subscribe to that philosophy and I don’t want to burden my physical existence with physical objects to carry.

So I did what I’ve been doing with a lot of stuff: I scanned them. Scanning technology is remarkably cheap now. I own a Brother MFC-JB05DW mega tank printer/scanner/fax machine that retails for $180, which is terribly cheap by early 1990s prices. I bought it on sale for $120, used a $60 rebate card I got when I bought tires, cashed in $60 of reward points from Office Depot, so I got the entire thing for the cost of the sales tax out of pocket. I use Ubuntu as an operating system (free), and the gscan2pdf app (also free), which makes scanning items like this a snap. I saved them as pdf files and uploaded them to my cdn.

You can download the collection as a 109.7 MB zip file.

And yes, it was a bit of a wretch to throw old issues away. It is a wondrous thing to hold something in your hand that someone else, far away and long ago, once held. I actually wrote about this in just13, because a long while ago I received a package from an aunt I had not seen in decades, and it was quite amazing to hold something that she had once held.

This work is licensed under a Creative Commons Attribution-NonCommercial-ShareAlike 4.0 International License.Permalink for this article:
https://iswpw.net/2020/02/23/living-free/
Published on: 23 February 2020 by Ken
Categorized under: Modern Life, Politics and Economics
Tagged with: libertarianism, self-publishing, zines

Jim still publishes his newsletter. I have been a subscriber since 1994 or so. Even contributed to it a time or three. I have a feeling there are very few subscribers left but since it is such a low-budget operation I am sure that’s not a concern for him. He has outlasted scores of newsletter and zine publishing contemporaries.

Sorry to hear you’ve abandoned your libertarian principles because some right-wing nutjobs apparently co-opted the movement. I too became disgusted to find fellow libertarians essentially turning hard core conservative in the past several years.

Thank you, kind stranger, for this post, and for scanning and sharing your old issues of ‘Living Free’. I stumbled across your post because I was getting ready to write the article you wrote, but you wrote it so well I won’t have to.

I’ve also moved on from the libertarian ideals of my youth, since as grownups we have to live here in the real world. But I subscribed to Jim’s zine for many years, contributed occasional letters and maybe articles, and thought of Jim as a friend. I’m happy to hear that he’s still alive, and looking forward to reading through the issues you’ve shared. Thanks again.