Buying Stamps to Save Democracy 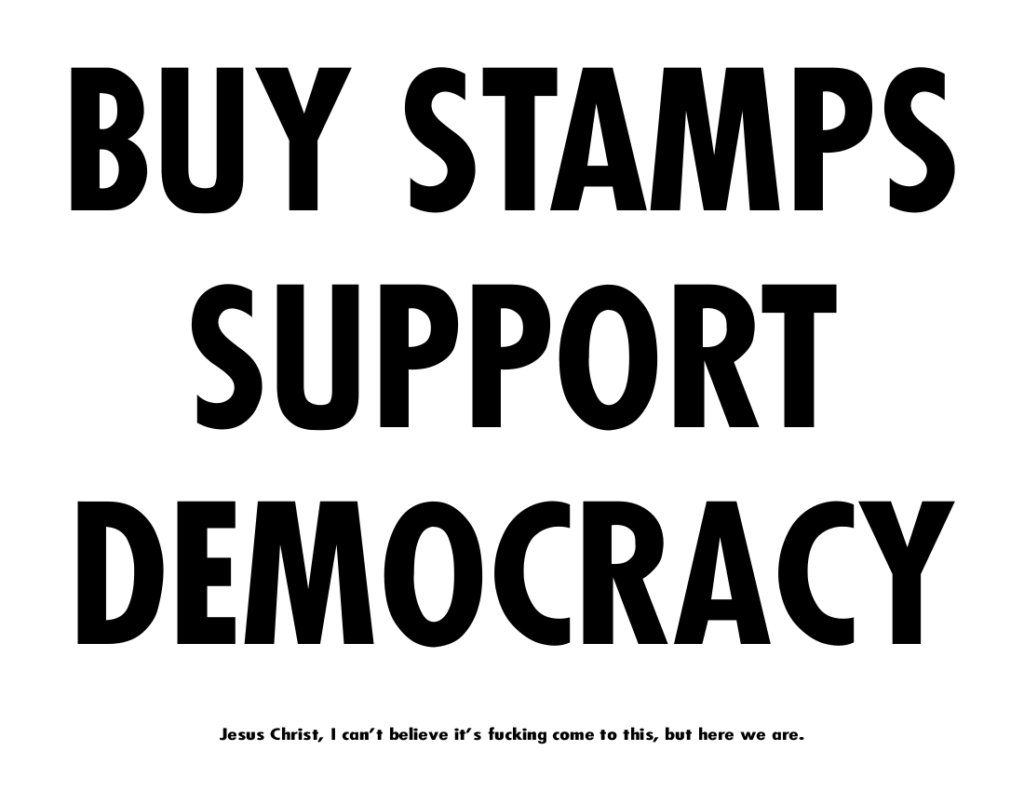 I can’t believe it’s come to this, but here we are.

The current occupant of the White House has launched an attack on the Postal Service because he believes that mail in voting will lead to his losing the election.

These are the facts:

The fact is, Donald Trump does not like to lose. And when he thinks he’s going to lose, he finds a scapegoat. (Even though he won in the Electoral College in 2016, he still lost the popular vote by 3,000,000 votes, which he claims was due to California allowing “illegals” to vote, despite the fact that there are only 2.4 million undocumented people in California. The average voter turnout in the United States is under 60%. The idea that undocumented people could be organized to vote at a rate of 125% when many of them do not report being victims of crime is entire unbelievable.)

At a time when the United States is leading the world in COVID-19 cases and deaths mail-in voting is the safest way to vote. But Donald Trump doesn’t care whether you are safe or not. He just doesn’t want you to vote, period.

Donald Trump is anti-democratic. He does not believe in, and actively works to dismantle, the very aspects of our society that work to make democracy work, including:

Trump’s attack on the Postal Service is a threat to democracy. We need to contact our Senators and Representatives. But in the meantime, there’s something we can all do:

Vote with your dollars. Buy some stamps. And then broadcast that loud and far.

I made some signs to put on my car windows. If you want to do the same, you can download them here.

Will this make a difference? I don’t know. Democracy is an ongoing experiment. Here is my hypothesis.

You may also find this discussion particularly enlightening if you need some more background.

This work is licensed under a Creative Commons Attribution-NonCommercial-ShareAlike 4.0 International License.Permalink for this article:
https://iswpw.net/2020/08/23/buying-stamps-to-save-democracy/
Published on: 23 August 2020 by Ken
Categorized under: Politics and Economics
Tagged with: democracy, election2020, elections, fucktrump

Pork Cutlets in the Air Fryer »