I said a while ago that I was going to explore various online freelancing opportunities to see how much money I could make with them.

The first one I tried was TextBroker. It’s pretty straightforward, really: you sign up, and look through lists of articles that people want you to write in order to make the internet worthless, write them, and then get paid via PayPal.

Of course, you have to write five articles first and wait for them to approve them before you can write more, which is perfectly reasonable. If you’re acting as the middleman, trying to connect content writers with people who write content, you don’t want a bunch of morons with the grammatical skills of a walrus taking all your bids. So I wrote my first article, and then four more a week later. And waited. And waited some more.

All that waiting really started to bug me, so I sent them an email asking if they couldn’t expedite that approval process, which they did, post-haste. I figured that they just had a temporary backlog.

I’m a fairly capable writer and figured that with time I would eventually move up to a four-star ranking. (To be honest, you don’t make much more writing four-star articles than you do writing three-star articles. Five-star articles are where the real money is.) I wrote a bunch of articles and waited for them to be approved.

I’m still waiting. To date, none of the articles I wrote after my original five have been approved. Which wouldn’t bother me so much, except that this isn’t how their system is supposed to work. Take a look at this snapshot of their front page:

Notice anything funny there? “As soon as we receive an article from you we evaluate it. Your rating is based on the average quality of your five most recent articles.”

To my way of thinking, “as soon as” means fairly immediately. A day, maybe two, a week at the most. But look at this snapshot I picked up today of my writing history: 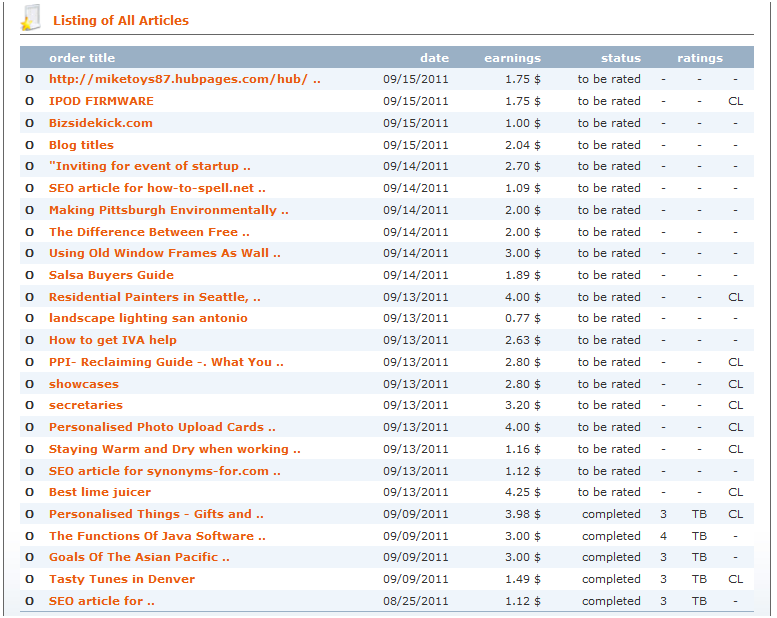 The last article I wrote for them was submitted on September 15, almost two months ago. There’s no way you can consider that in the ballpark of “as soon as.”

I could keep writing for them as a three-star writer. In fact, I didn’t expect to be promoted to a four-star ranking, anyway. All the “CL” tags in the right-hand column refer to client ratings. The feedback I received there was uneven, with some loving my material and some finding it merely acceptable. It takes a bit of practice to get used to the type of writing that most of these clients are asking for, which is almost entirely for SEO purposes. But I figured that with time I would eventually move up.

I wouldn’t mind my three-star ranking, except for two things. First, going back to TextBroker’s front page, they note that “your rating is based on the average quality of your five most recent articles.” No, it isn’t. In my case, it’s based on the quality of my first five articles.

Like I said, I wouldn’t mind a three-star ranking if that’s an accurate reflection of my writing abilities. But lately when I log in, this is what i see in the available jobs window: 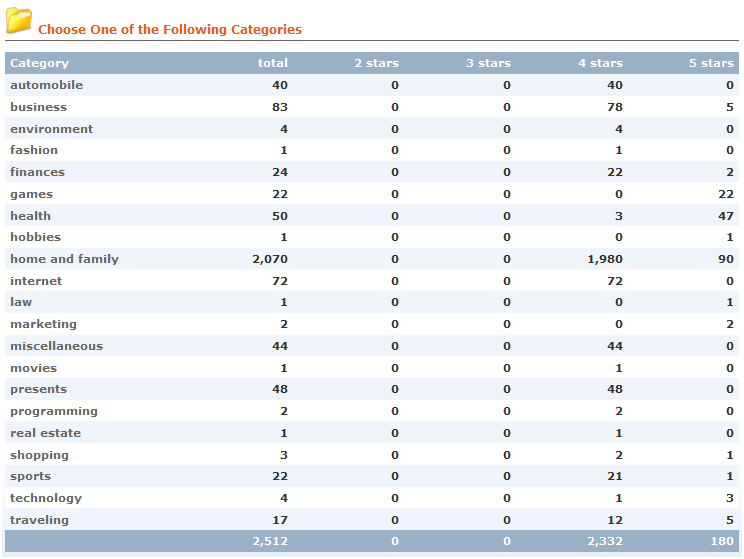 Jobs for which you are qualified are in orange. What’s that? you ask. You don’t see any three-star jobs available? Neither do I. Lots of four-star jobs, and a handful of five-star jobs, but no three-star jobs. I wouldn’t be bothered by this if I really ranked as only a three-star writer, but I have no idea what my actual ranking is. For all I know, those last few articles I wrote could have pushed me over into the four-star or even five-star category. But I’ll probably never know.

I’m not saying TextBroker is a scam. Far from it, actually. I kept track of the time I spent writing those articles, and I did get paid (via PayPal, which I love) for them. Looking at just the actual time I spent writing, I made about $9 an hour. That’s not a bad rate of pay for work I can do in the comfort of my own home, especially in Michigan, which has a high rate of unemployment and underemployment.

In reality, I probably made closer to $7 an hour, because I had to spend a fair amount of time sifting through those article requests. Needless to say, some of them are extremely poorly worded. For example, what am I to make of an article request that goes like this:

Write a 100-word article about Hampton Lamps in Hampton, Missouri. Do not mention the name of the company or the city.

Really? This is not errant hyperbole on my part. It wasn’t unusual to see dozens of requests just like this, posted all at the same time, with the only variation being the name of the city.

In mathematical terms, this article request looks like this: (x + y) – x – y =0. The job request above pretty much means that I could write about anything, so long as I didn’t mention Hampton Lamps or the town of Hampton, Missouri. There is a link to “Rate this Instructions,” but I’m trying to make money, and I don’t get paid to tell people how to accurately describe the article they want written. I realize these people aren’t professional writers (that’s why they’re contracting this work out, after all), but still, they should be able to be a little more accurately than this.

I keep checking in with TextBroker every few days, but I’m certainly not expecting anything at this point. Back to the freelance drawing board, I suppose.

This work is licensed under a Creative Commons Attribution-NonCommercial-ShareAlike 4.0 International License.Permalink for this article:
https://iswpw.net/2011/11/09/freelance-follies-part-one/
Published on: 9 November 2011 by Ken
Categorized under: Uncategorized
Tagged with: freelancing, TextBroker

…i will be collating all weekend long… »

0 comments on “freelance follies, part one”

2 pingbacks/trackbacks on “freelance follies, part one”