I’m writing this post at the library, because I don’t have internet access at home. I don’t have internet access at home because AT&T cut it off on Tuesday because I hadn’t paid the bill. I don’t blame them one bit for this, because paying the bill is my responsibility, and since I didn’t have the money, I couldn’t pay it. That’s just how it goes sometimes.

I did get my bill paid today, because luckily I had internet access at work, which I usually don’t have. Amazingly, I was able to negotiate the Byzantine mess that AT&T calls a web page with a fair amount of ease, and after figuring out my password in only three guesses, I was actually able to view my bill and pay it. Previously, this had required several hours of hair-pulling on my end and several hours of incredibly nonchalant apathy on their part, an experience so stressful that the panic and anxiety I experienced could only be relieved by spending several hours in a dark basement with a small bowl of water and a large bottle of Xanax.

So, problem solved, bill paid, internet should be back on by the time I got home, right? Seemed like a no-brainer, right?

Before I left work, I thought “maybe I should call them, just to make sure.” So I did. That’s when my day began to get really interesting.

First, I had to go through their voice mail system. You are probably familiar with these: the computer says something unintelligible, you bark your answer into the phone, and then it replies “You said you are interested in ‘hideous feedback in dust hallucination regime’. Is that correct?” Which it isn’t, so you say “no,” the computer responds that it doesn’t understand and starts over. After you’ve gone through this several times, you finally just start shouting things like “speak to a person,” “speak to a real person”, and “REAL PERSON!” At this point the computer decides that it’s had enough fun with you, and says “I’m having trouble understanding you. Would you like to speak to a real person?” You shout “YES!” and after waiting several minutes while listening to the most horrid music, a different computer announces that the customer service department is closed, and gives you their hours of operation. Glancing at your watch, you realize that the customer service department closed while you were on hold waiting to be transferred from the computer to the customer service department.

That’s how it usually goes with these things, and I was expecting something along the same lines, so I was pleasantly surprised to find that AT&T’s computer could understand me perfectly well, and did what I asked of it. It told me I had had a past due amount, told me it had been paid in full, and even offered to review the details of that bill, which I declined. I wanted it to tell me when I could expect internet service again, but after I declined to hear the details of my bill-paying activities, it said “Would you like to make a payment?” I’m not a Vulcan, but it still seems pretty illogical to me to make a payment of $0 on a balance of $0, so I said “no.” The computer took that to mean “yes” and sent me to accounts receivable.

I pressed “0” at that point, which of course is what I should have done right away. This trick doesn’t work on all automated systems, but on some of them (including this one), it puts you into the queue to talk to a real person. After only a couple of minutes (another pleasant surprise!) a very nice and very confused person came on the line, asking what he could do for me, since only a lunatic would want to make a $0 payment on a balance of $0.

I explained the situation and after a few clicks on his keyboard, he told me that my service had been permanently disconnected. No problem, however, he would get someone on the line who could get me reconnected.

Person #2 came on the line and I listened while they had a nice little chat and Person #2 did some clicking on her keyboard. It turns out that AT&T has recently updated the lines in my area, and the old DSL I previously had is no longer available, which I found curious, because it was available until 8:07 on Tuesday night. I would have to get an upgrade to my service, which of course, necessitates a new modem. I am, apparently, in the wrong geographic area (I love it when I get told this—the next time I move, I’ll call AT&T and ask them which is the right geographic area that I should live in), and the person #2 unceremoniously transferred me, without warning and without explanation, to person #3, who was even more confused when I appeared on his phone line.

Person #3 did some clicking on his keyboard. He managed to get a promotional deal on even faster service, so instead of spending $40 a month for 1.5 Mbps (my previous rate), I would be spending $25 for 3 Mbps service: twice the speed at just over half the price. I should be very happy, right?

Well…not really. First, I will be without internet until some time on Tuesday, December 6. Since I need the internet to make a living (it’s complicated, but I will talk about it someday) I’m essentially getting a three-day unpaid vacation. There may be some ways to work around that (spending all my free time at the library until they close, for instance), but I’m not holding my breath. But that’s nothing compared to the modem/gift card conundrum.

Because they’ve upgraded the lines, I need to get a new modem, which costs $100. Of course, AT&T gives you a $100 rebate, which makes the modem free, so in their eyes it’s no harm, no foul.

Except that it is. I don’t happen to have a spare $100 lying around. (Geez, if I did, don’t you think I would have paid my bill before they shut off my service?) They’ll issue a $100 gift card, but only I’ve had service for thirty days. (This is the same policy they had when I originally signed up for AT&T high speed internet, and it took almost three months to get the gift card.) Since the whole point of the rebate is to make sure that their customers don’t actually have to pay for the modem, I asked Person #3 if they could just send the modem without billing me and without sending the gift card.

Okay, can you send me the modem, bill me for it, and then credit me for it?

Well, can your manager or supervisor do that?

The deal is a sweet one for AT&T: they get to sit on my money for 45 to 90 days, and when I get the gift card, I can’t use it to pay my online bill. Even if I could, the modem wouldn’t entirely be free: I have to pay sales tax of 6% on the modem, which brings its price to $106, meaning it’s not a free modem, it’s a six-dollar modem. This may sound petty, but I make about $8.50 an hour substitute teaching and $7.75 on my other job, so six bucks is about an hour’s worth of work, after taxes.

When Person #3 asked if there was anything else he could do for me I asked for the name and address of someone I could complain to about this ridiculous policy. He said there really wasn’t a specific person in the company, but that I could talk to a supervisor. I passed. I’ve worked in places like this before, and quite frankly, a “supervisor” is usually the person in the next cubicle. Even if I managed to talk to a real supervisor, all they would do is listen attentively, apologize profusely, and then sleep extremely well. My concern really wouldn’t be their concern. So I said, no, there really isn’t anything you can do about that situation. I’ll just blog about it. Which I am.

So, if anyone from AT&T corporate who has the power to not just give a damn but to actually effect real change ever reads this: I like your service. I’ve never once had an outage in the past 13 months. (Well, until now, but that was my fault.) I’ve never had a problem with your company, other than your website, and you have apparently made great improvements there. But listen. Put down your copy of Yachting Monthly and read the newspapers. We don’t have a lot of money out here in Realpersonland. The economy sucks. I’m now working two jobs to make half the money I used to make at one. I can’t afford to have you sit on $100 of my money for the next month and a half. If you tell people the modem is free, then just GIVE AWAY THE MODEM! Forget about your ridiculous gift card offers. If you’re worried about people getting the modem and then cancelling the service, get their debit card number first, and then if they do cancel in the first twelve months, charge them for the modem. That’s fair and honest. In fact, it’s more fair and honest than saying something is free when it actually isn’t.

I did try to contact AT&T directly to complain, but when I went to their website and clicked on “Contact”, it kept asking me what I needed help with—presumably to put me in touch with someone who could help me with a specific billing or technology problem. So I typed “Customer Relations” into their search box and got this: 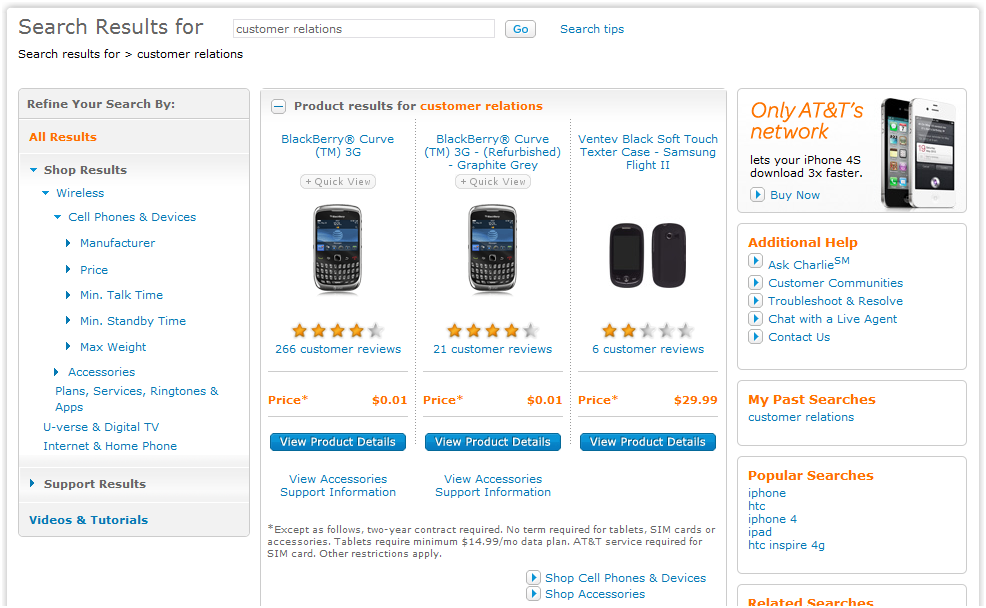 That’s not quite what I had in mind. I guess I’ll have to do it the new-fangled way, and just tweet this post to them @ATTCustomerCare.

By the way, Person #3 was a very nice young man named Eric. I’m afraid I was rather hard on Eric. I didn’t yell or swear or anything, but he was quite aware that I was not in the least bit happy. So if you ever read this, Eric, I apologize for being less than my usual happy self. I hope you understand.

This work is licensed under a Creative Commons Attribution-NonCommercial-ShareAlike 4.0 International License.Permalink for this article:
https://iswpw.net/2011/12/01/atts-rebate-express/
Published on: 1 December 2011 by Ken
Categorized under: Uncategorized
Tagged with: AT&T, internet, that's no way to run a business, things that are completely ridiculous, what are they thinking?