Mostly written in January. Stopped writing in February. Probably not finished, but who knows?

I may rework parts of this later. Again, who knows? I sure as hell don’t.

In reality, that’s a lie. I can’t help but make new year’s resolutions. New Year’s Day is just a day, just a box on a calendar, but it still feels like a chance to start over.

The problem is that I can’t think of one resolution, much less five. I supposed I would like to be more hopeful, since that’s been a difficult thing to be in 2020. But is that really a resolution? (Or is this what friendly Instagram stranger meant when they said to do intentions. I intend to be more hopeful. Is that it?1)

It is a difficult time to be hopeful. We are watching the current administration flame out, which is a new experience. Generally, an old administration ends and a new one begins. A bit of pomp, a bit of circumstance, and life goes on. What should be a peaceful process that is a hallmark of American democracy is beginning to make Lord of the Flies look tame.2

It is a difficult time to be hopeful. We are in the middle of a pandemic (yes the middle; we are nowhere near the end of this) that has killed hundreds of thousands, and will kill hundreds of thousands more. We are watching politicians who denied that the virus was an issue or even that it was real, who denied that it was even real, push their way to the front of the line for a vaccination against it. They knew, and they will not be held accountable.3

It is a difficult time to be hopeful. It is clear that our current social, political, and economic structures were not set up to help the common person, but to provide just enough sustenance so that they do not riot. The minimum wage is set to be just barely on the safe side of the guillotines. Lots of people face evictions and the lines to food banks in some places are miles long. The quest for social, racial, and economic justice is being defined as domestic terrorism by people who are pretty much okay with an actual insurrection in the United States Capitol.

This is America. But we knew this:

It is a difficult time to be hopeful. Americans always like to say that they have a can-do attitude, that when the going gets tough, we roll up our sleeves and get the tough stuff done. And the going got rough, and when the tough thing to do was to merely stay home for six to eight weeks instead of going out for a beer or getting our nails done, all in the name of eliminating an imminent health threat, a bunch of us decided to horde toilet paper and sanitizer and some of us decided to protest because “oh, shit, the economy!” and some of us decided to protest because of gravy, guns, eagles, freedom, and “something, something, I pay taxes, damn it!” We are a nation who has so mythologized our history that we are easily led astray.

It is a difficult time to be hopeful. The point of social media was originally to connect and share. But if it’s free to us, we are not the customer. We are the product. It is our attention that is being commodified and sold off to the highest bidder. Weird conspiracy theories about and gain traction not because they make sense but because those same minds who can accept easy lies but not hard truths find their oversimplified (and often nonsensical) explanations fit in too easily with their distorted view of the world. Social media has revealed our insecurities (and they mostly consist of people who don’t look or sound like us). We are all afraid of being left behind, of being the wall flower at the high school dance. We automatically gravitate toward whatever has the most likes because evolution has programmed us that way: stay with your herd. But evolution doesn’t know about the internet or anything created by humans. It only understands concepts like “sweet” and it is unable to distinguish between something like a bucket of plums, which is sweet and full of vitamins and antioxidants, and something like a bucket of antifreeze, which is also sweet but will also kill you because that’s what ethylene glycol will do.

It is a difficult time to be hopeful. While the new administration is a breathe of fresh air (and by “fresh” I mean sane and orderly and not batshit crazy), I have seen this particular party in power before and while it has done some great things (such as getting us through the Great Depression) it has also done a lot of Not-So-Great-Things™ (such as the Bay of Pigs, Viet Nam, and our entire Middle East policy6). Truth be told, FDR kept us on a lifeline throughout the 1930s. It was only after we took advantage of the opportunity to enter WWII after Pearl Harbor that our economy turned around, largely because we could send a lot of hungry, jobless young men off to feed the engines of war and, thanks to jingoism, everyone at home was all too happy to continue to go without so that they could do their part to feed the engines of war. And when the war was over, and all those broken and battered young men came home, it became necessary to invent the Cold War, and the engines of war evolved into the military-industrial complex, which will be with us forever and ever, amen.7

And 2020 was a difficult time to be productive. I did not learn Swahili, or take up oil painting, or get an online degree in electrical engineering. I struggled to keep a small group of people alive and well during a time that it was especially difficult to do that. I’m basically an introvert who only enjoys the very rare night out, and I walked past bars and restaurants that were full of people laughing, drinking, and eating (and also getting sick). I got on social media and watched friends, acquaintances, and former coworkers going out and going on vacation (some to states where the corona virus was out of control4) and think “Did I just hallucinate a global pandemic?” 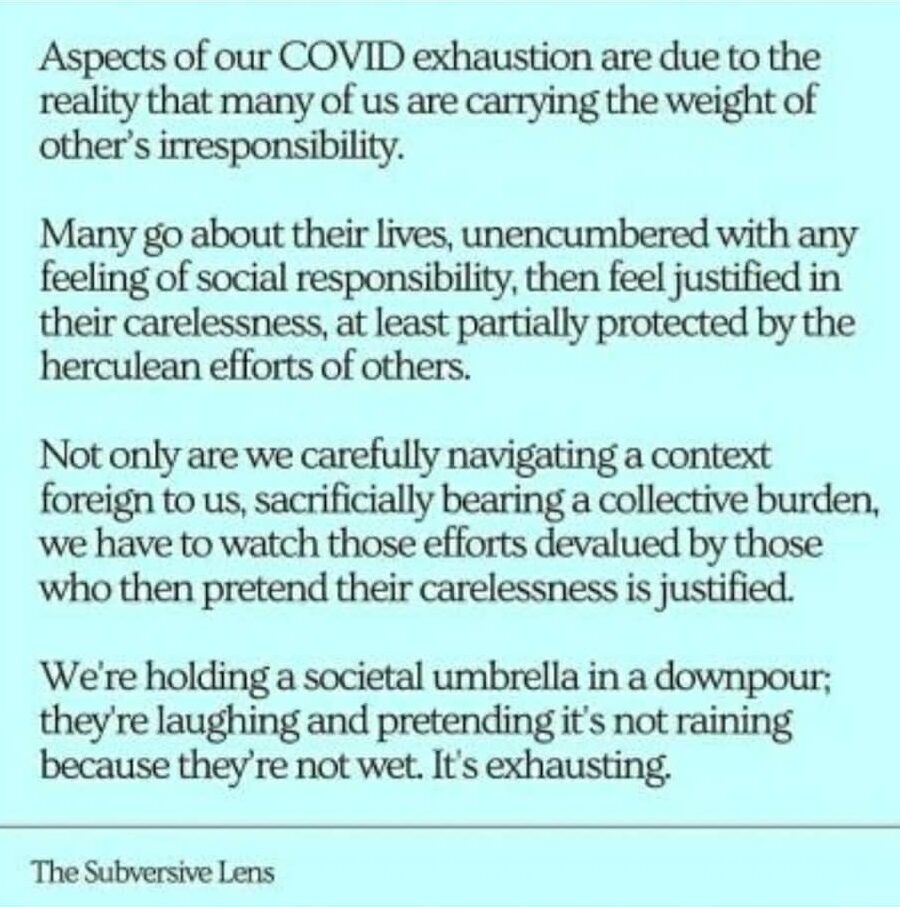 I basically watched a lot of people whom I thought I knew and whom I once trusted reveal that because they had not yet caught COVID-19, think that they were somehow immune and they were thus exempt from all the rules and restrictions. I watched people who I once thought to be reasonably intelligent flaunt all sorts of rules and recommendations for halting the spread of this disease because “I trust the people around me.” Never mind the fact that COVID-19 is not spread through sexual contact and that trust is not an issue. You are not sharing body fluids; you are sharing air. And you have no idea what is in their lungs. And neither do they.5 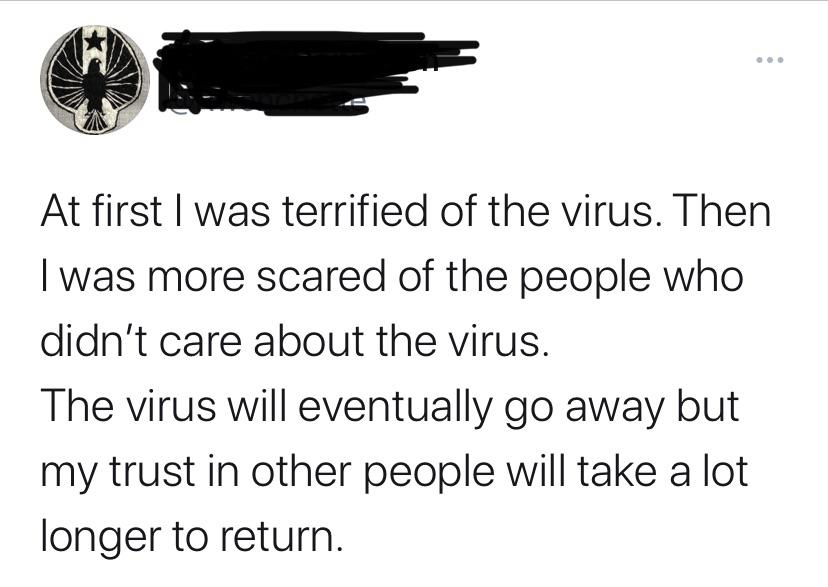 1 I should dig deeper. This was a year when we had the time to go deeper, but we didn’t have the energy. Some of us just said “ugh, okay, whatever, nevermind” and some of us who can accept easy lies but not hard truths found conspiracy theories everywhere.

2 One of our two main political parties looks ready to expose, which would have shocked and horrified our founding fathers, for whom political parties were anathema. For people who wonder why politics in the United States seems to barely work, it’s because the system was not designed to work with political parties.

3 This will be in the interests of “unity” or “putting the past behind us.” No, fuck these people. If you want reconciliation, we need the truth. And we can’t have truth if we deny what virus-deniers said because it was politically expedient for them to say it. We cannot allow our long term survival be dependent on their short-term thinking. There’s a word for that: extinction.

4 This was in August. It’s out of control everywhere now.

5 The specter of AIDS and HIV made us once reconsider our attitudes toward whom we shared our bodies with and how. But now that anti-viral drug cocktails are commonly available, we don’t even think about this disease any more. It’s been ages since I’ve heard the expression “safe sex.” I assumed early on that COVID-19 would make us reconsider our attitudes about whom we shared our personal space with and how. But nope. That’s not even on the radar for people now. Last year at this time, an idiot needed a gun or a car to kill me. Now they just need to breathe around me.

6 The obvious solution to this situation is to go solar and get the hell out of there and let them figure out their own problems (which, once we leave, will be reduced by 98%), but our elected representatives continue to be the drill thralls of both the fossil fuel industry (“drill baby, drill!”) as well as the one percent on Wall Street.

7 A democrat (John F. Kennedy) got us into Viet Nam, and a Republican (Richard Milhous Nixon) got us out of it. Neither of them did it out of any sense of personal or national morality. It was merely politically expedient for them do so. Meet the new boss; same as the old boss. We’ve been fooled before and we’re ready to be fooled again.

This work is licensed under a Creative Commons Attribution-NonCommercial-ShareAlike 4.0 International License.Permalink for this article:
https://iswpw.net/2021/02/27/welcome-refugees-of-humanity/
Published on: 27 February 2021 by Ken
Categorized under: Modern Life
Tagged with: I may as well be a sea cucumber, what are they thinking?